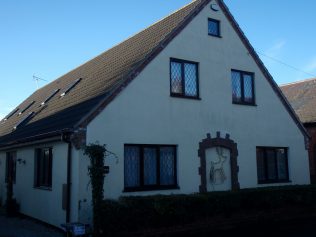 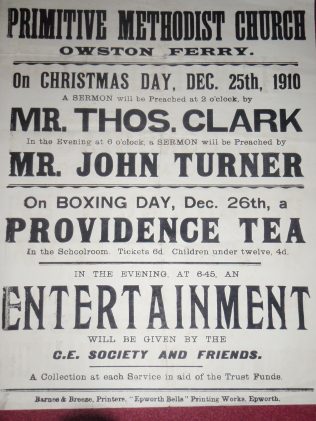 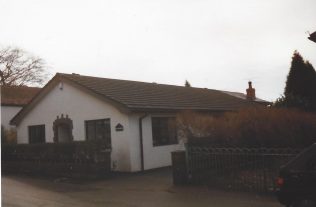 Owston Ferry has a notable history in the development of Methodism. The early Methodist preachers John Wesley (15 recorded visits), Charles Wesley and John Bennet (two recorded visits) founded Methodism here. It was at Owston Ferry that Wesley nearly drowned when the ferry unbalanced (Journal 24.10.1743), and it was in Owston Ferry that John Downes was arrested for preaching in 1744.Furthermore a correspondent of John Wesley, Elizabeth Woodhouse (nee Harvey, daughter of the then vicar of Finningley) married the local landowner Gervase Woodhouse, and she was encouraged by John Wesley to nurture the Methodist society.

The Woodhouse family, resident at Owston Hall, later supported the Primitives (see P.M. magazine 1839, memoirs of W.G. Belham for an account of both Belham and Woodhouse praying together).The first Primitive chapel was built in 1820. The Primitive Methodist magazine for 1823 has an obituary for Mary Hopkinson which gives an account of the early practices of the Primitives:stating “In the evening we both heard him (S. Bayley) preaching at the Ferry. After preaching there was a prayer meeting-our brother formed a penitent square, exhorting and entreating those penitents to come into it.” The magazine by way of explanation gives a footnote, “It is customary with some of our preachers, to form a ring, a square or some kind of open place, and invite mourners to come into it, to be prayed for. And this is often very useful.”

A second Bourne chapel was erected in 1838, and a third Bourne chapel was opened in 1850 with a Sunday school added in 1870. It was a part of the important Scotter Primitive Methodist Circuit.The chapel closed in 1962, the property sold and has subsequently been converted into a residential dwelling, barely recognised as a former chapel.

The proximity to the recreation field provided a ready location for camp meetings and annual Great Gatherings. Across the river Trent by the ferry to East Ferry,  Hardwick Hill provided a location for Camp Meetings of the Scotter circuit, and later for Sunday School outings.