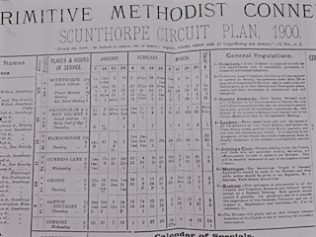 This is an obscure location being a small settlement to the west of the B1207, near to the former Appleby railway station, current postcode DN15 0DG. It was variously referred to as Santon terrace or Santon Cottages. It is understood that the former ‘chapel’ building no longer exists.

The location is a short distance from the steelworks, and an existing settlement was developed to meet the needs of the north ironworks and the associated influx of labourers. Archive photographs reveal the close juxtaposition of the domestic and the industrial concerns. A similar concern was attempted by the Primitive Methodist circuit at Conesby, near to other steelworks to the north of Scunthorpe.

In 1918 this chapel was described as ‘set right in the heart of the ironstone area-in a small building adapted to sacred purposes.‘

The 1900 Scunthorpe circuit plan had listed only seven societies, of which Santon Cottages was small in terms of circuit assessment, having 8 members out of a total circuit membership of 321, and providing only four per cent of the total. It did however have two services every Sunday, and a series of evangelistic services. Significantly one of the society stewards named was a J. Moore, who as a preacher was listed with an address of Frodingham Mines, reflecting the industrial connection. The cause was in part largely sustained by the Moore family, father and son.

Financial records 1922-1937 are in the Lincolnshire archives.