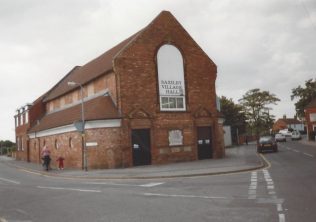 Saxilby Primitive Methodists purchased 1852 their first chapel second hand from the Wesleyan Methodists. It had been built in 1811 in Chapel Yard, off the High Street opposite to The Sidings/Station Approach.

They found a replacement at the southern end of High Street. A West Lindsey District Council guided walk sheet tells us that this new home was built by the Free Methodists in 1851, but was extended by the Primitive Methodists in 1875. The 1875 chapel served until 1944  but subsequently it was demolished and a fire station built on the site.