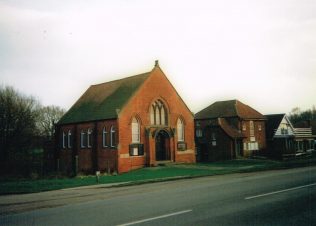 Seathorne Primitive Methodist chapel is in the northern part of the parish of Skegness and was formerly known as Skegness Bank Chapel until either around 1933 or 1980, depending on your source.

Keith Guyler’s photograph shows the 1910 chapel on the left. His notes also say that the building on the right is the earlier chapel with a date of 1889 and is a much altered hall & community centre. This does not quite make sense: can anyone explain?

Just to add to the confusion – or maybe the clarity: in the 1837 Primitive Methodist magazine there is an account by John Coulson of the opening of what he calls Skegness Primitive Methodist chapel on July 24th 1836. He was on e of the preachers, along with Bro Stamp, Sister Stamp and R North. Mr W Green kindly gave the land for the new chapel, which measured 22′(w)  x 30′(l).