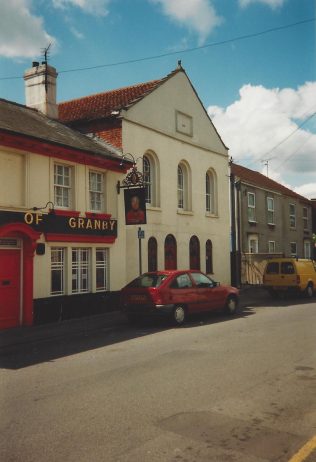 The first Sleaford Westgate Primitive Methodist chapel dates from 1841 and was west of the Marquis of Granby. Keith Guyler’s notes with his photograph say “S School 1835”. At the time of his photograph it is two houses.

There is an account in the Primitive Methodist magazine of the opening of the chapel on November 8th 1840. The description is transcribed below.

In the 1871 magazine there is a note by J Thomason about the Sleaford chapel re-opening on 12 January 1871 after the chapel had been closed for alterations and renovations. The preacher was Rev R Bryant.  Unlike many chapels, the cost of the improvements had already been raised.

The replacement 1907 chapel was built opposite the first chapel and had a manse at the back. It was demolished in 1964 and a telephone exchange built on the site.