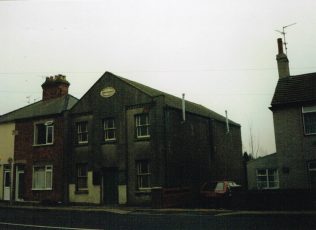 Little London Primitive Methodist chapel dates from 1829.  It was rebuilt in 1842 and a Sunday school added in 1866.  It closed in 1985 and at the time of Keith Guyler’s photograph was used as a storehouse. On Google Street View in 2015 it still looks unused and unloved.

68 London Road, three doors up from the former chapel, is a house named the Old Chapel. This building is marked on the Ordnance Survey County map as a school and is the school which was related to the Primitive Chapel.