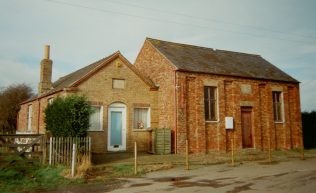 The first Stickford Primitive Methodist chapel, initially a barn, dates from 1844 and served for eight years before the  the foundation-stone of second chapel was laid on June 30th, 1854 by Mr. John Eno, of Leake, with an address by Mr. J. Jenkin. The chapel was opened from 12th November 1854 when sermons of varied excellency were preached by Messrs. Gibbs, Fletcher, and James Shaw.

The chapel cost £120. “The whole building is executed in a first-rate style, and reflects great credit on Mr. Andrews,the contractor, who is the leader andprincipal supporter of our society at Stickford”

At the time of Keith Guyler’s photograph in 1995 it was a store.