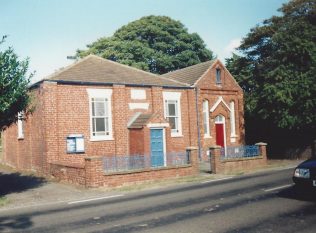 The first Theddlethorpe St Helen Primitive Methodist chapel was opened in 1835. In the Primitive Methodist magazine, John Coulson, who was one of the preachers at the opening, along with John Stamp, tells us that the new chapel measured 18′(w) x 27′(l). Despite this, they held an extra service in the open air in the  afternoon for those who couldn’t get into the chapel.

The chapel stood on an exposed sea bank and was difficult for people to access, but in time it became too small for the society and a replacement  chapel was opened in 1852 with a Sunday school added in 1888. The first chapel became a doctor’s surgery

The new chapel measured 28′ square and 15′ high to the wall plate.

The Primitive Methodist magazine for August 1852 contains an account by Hugh Campbell of the opening of the chapel on 23rd May 1852 with sermons from J North of Grimsby and W. Briggs of Hogthorpe.  A successful tea meeting was held the following day.

The last service was held in the chapel at Christmas 2003 and it was then converted into a private house.