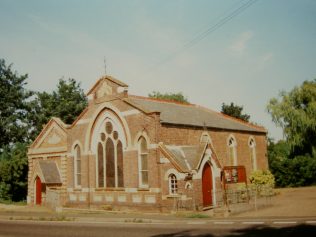 The first Tydd Gote Primitive Methodist chapel dates from 1843 in West Street. It was soon too small and in 1859 a new chapel was built behind the present British School building on the current site; its location is now partly in the garden of the adjacent bungalow. In Keith Guyler’s picture, the chapel is on the right and the building on the left is the British School.

The Primitive Methodist magazine has an account of the opening of the chapel which was in the Wisbeach circuit, although it calls the chapel Tyd Gate.

J Kerridge drew up the plans and specification free of charge, but the whole development, including boarded floor, slate roof, a rood of land and the cottage on it cost £258/10/-. Towards this they had raised £86, in part through a tea for 280. The building took three months

The School building dates from 1869, ten years after the chapel.  It was built by the Trustees in order to allow all children in the village to have access to basic education. It continued in this use until state education for all became established, after which its use was as Sunday school.

As the congregation continued to grow a third chapel was built on the same site in 1903.  The building incorporated 5 cisterns to capture water as the village did not have mains water until 1929. The chapel closed in 1976.

Raymond EO Ella provided the following information about the 1903 chapel from the Lincolnshire archives:

Ref. MLI97235: This is listed as a Methodist Chapel, Main Road, Tydd St. Mary, but it was a Primitive Methodist Chapel built in 1903. There is a ornate ashlar tablet with ‘Primitive Chapel 1903’ on a gable. The building in 2010 became The Newfrontier Church.  Lincolnshire County Council list the buildings as of historical and architectural interest.

David Secker added to the picture:

The (chapels are) in the hamlet of Tydd Gote in the parish of Tydd St Mary.  I believe the British School was erected by chapel members, some of whom also gave of their time in teaching. The British Schools were the nonconformist’s answer to the National Schools supported by the Established Church.

The Boston Guardian of March 1894 tells how several choirboys from Tydd St Mary church attended the Primitive chapel in Tydd Gote. For this “heinous sin of schism” they were censured and ordered to wear black surplices instead of white ones on the following Sunday. “For of such is the Kingdom of Heaven”, quoteth the paper.

Martin Peirce got in touch on 31st October 2017 to say “I preached at Tydd Gote back in the 1990’s. By that time it was part of “Rural Ministries” (formerly the Datchett Evangelical Fellowship) and being run as an Independent Evangelical Church.”

On Google Street View in 2016 it is named Fenlands Church. There is an excellent account of how the Primitive Methodist society developed in a booklet on the Fenland Church website.

From the Wash to the Fen; booklet on the Fenland Church website accessed September 10th 2015