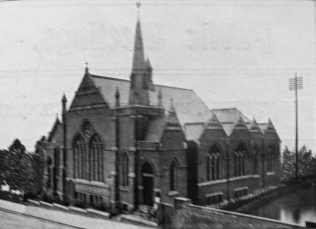 Harringay Primitive Methodist chapel, originally known as Mattison Road, opened in 1891 as an tin tabernacle – a pre-fabricated timber framed structure clad with corrugated iron which could quickly be assembled from a kit.

The iron chapel was a mission of the Caledonian Road station in a rapidly growing area. Both the site and the building cost around £300 and the building was inaugurated by the laying of memorial stones on November 17th 1890. It would give opportunity for Sunday school work as well as worship.

This was replaced by the buildings in the picture in 1901. This was clearly necessary because in 1903 membership was so high that Mattison Road was described as the chief Primitive Methodist church in London.

Originally part of the Caledonian Road circuit, it joined the Finsbury Park circuit after the Methodist union in 1932 until it closed in 1963.

The building is still there on Google Street View in May 2015 serving as a Roman Catholic church.