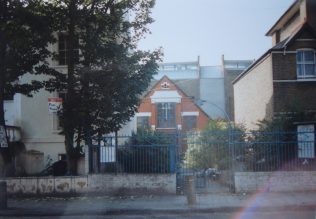 Hornsey Rise Primitive Methodist chapel on Hornsey Road in north London was opened in 1907.   It served the Connexion for 22 years until 1929.

At the time of Keith Guyler’s photograph in 1994 and on Google Street View in July 2012 it has become North London Spiritualist church.

An overview of the non-conformist history in Islington including the Primitive Methodists can be found in the Victoria County History of Middlesex.  It refers to Primitive Methodists meeting at Jubilee House, 473 Hornsey Rd. in 1887; and opening the Hornsey Rise mission at no. 21 Station Parade, Hornsey Rise, 1901. In 1903 the attendance was 44 in the morning and 103 in the afternoon. This building was replaced in 1908 by the chapel in the photograph.