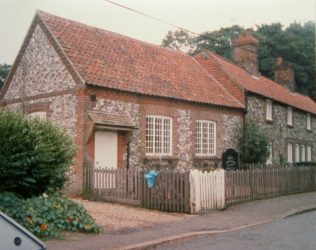 Anmer is south east of Hunstanton. Anmer Primitive Methodist chapel was opened in 1904.  Keith Guyler’s notes with his photograph say it was built by Edward VII (although probably not personally). They also say it was rented by a local estate; I suspect that means rented from the local estate – which is Sandringham.