Blofield is mentioned in the first list of Primitive Methodist societies grouped into the Norwich circuit when with 23 other societies it sent class money to the Quarter Day Board.  Blofield’s contribution for 1822-3 was the very large sum of £10.6.4d – most societies were sending just one or two pounds.

It disappeared from the records shortly after this, but reappeared on the preaching plan in the winter of 1831-2.  In 1833, 36 class members were listed.

A camp meeting was arranged here by the circuit in the spring of 1833 and from that time camp meetings were held in the village on a regular basis.

A note following on the class lists for 1835 points out ‘this Class has been much injured by the Baptists rooting us out of the Preaching house in an unjust manner.’[1]    Perhaps it was this issue which led to a sharp drop in class numbers to 22 of which ‘10 don’t attend much.’ [2]

The society does not appear to have regained possession of the chapel for in 1837 the class was meeting at the house of a Mr Chamberlain.

Six local preachers belonged to the Blofield congregation at this time, two of whom were women.  One of these was accused of scandalous behaviour by the Quarterly meeting in March 1836 – ‘The Matter of the Charges of Sister Moss drinking.’  Various people were sent to collect evidence and the reconvened meeting considered the matter.  In summer 1835, it had been noticed that Mrs Moss appeared rather the worse for alcohol.  Subsequent indiscretions were observed, but when she was challenged about keeping alcohol at home, she denied that there was even half a pint of liquor in the house.  The meeting found her guilty of the theft of some eggs and also decided Mrs Moss had kept the two shillings change from her coach fare to Loddon where she had been planned to preach when the money had been given her by the circuit.  In addition, ‘This Meeting Consider Sister Moss was in an arror [error] in going into the Publick House at Loddon to take Liquor on the Sabbath Day.’[3] The public revelations were punishment enough, but Mrs Moss had yet more humiliation to bear for at the Local Preachers’ meeting in June 1836, she was demoted one place on the plan for neglecting her appointments at Croxton.

A second preaching place was set up at ‘Blofield Mousehold’ and appears on the plans from 1832-3 when 19 members are listed, dropping to 14 the following year.  However, in 1837, with only 12 members, the class ‘meets at the Preaching house.’[4]  Could it have inherited possession of the chapel after the dispute with the Baptists?  By the 1850 neither Primitive Methodist congregations appears on the plan nor do they appear in the 1851 Religious Census returns. 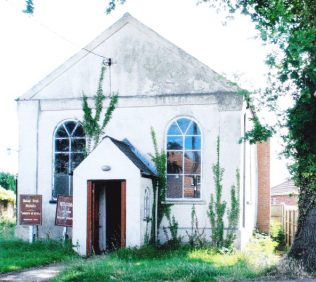 In 1868 a Primitive Methodist chapel was built at Blofield Heath with 80 seats available for rent and 30 free seats.  Although there were only 12 class members, the average congregation was estimated to be 75.  The land had cost £20 and building £165 of which only £65 had been raised by the time of opening.

The simple brick building had a round-headed window on either side of the doorway.  Work began well, but it soon became clear that the builder employed had seriously underestimated his price for the 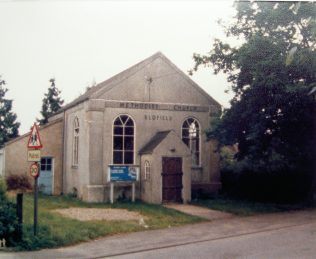 work.  He applied to the trustees with a revised estimate and after deliberation, they paid him a further £20 although they felt he had behaved reprehensibly in altering his agreement with them.    A small  porch  was added  when  the chapel was extensively repaired in the early 1930s.  The front windows were replaced in 1971 using a similar design to the originals.  Within, the early seating was removed and  pews installed from Calvert Street chapel after it closed in 1966.   The original box pulpit, reduced in size in 1912, was replaced with a platform.

The chapel at Blofield Heath was closed in 2007 and sold in 2009.  The building has been converted to a house.