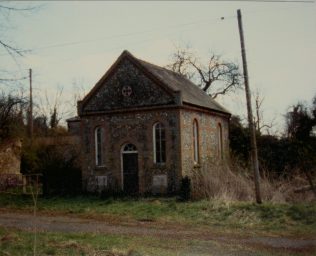 Bodney Primitive Methodist chapel shown in the photograph dates from 1885; it served until the 1978. It borders the Danger Area requisitioned by the M.O.D. in 1944.

By the time of Keith Guyler’s photograph in  it was semi-derelict. Another shore, Roger Legg’s book of long distance walks, says that in 1991 it was being used to store beds.

On Google Street View in 2009 it is semi derelict and unused.  It is very much more overgrown than in the photographs.