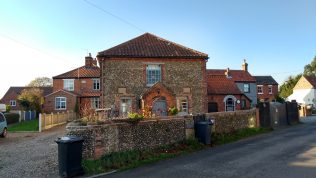 The Primitive Methodist magazine for December 1857 contains an account by Oliver Jackson of the opening of Briston Primitive Methodist chapel in Norfolk in 1857.  Briston was a place of increasing importance first missioned 36 years earlier. The society met at first in a cottage, then a rented barn before in 1832 a “neat and commodious chapel was built.”  As the congregation grew, a gallery was added.

However by 1856 the roof was in a poor state of repair with the main support beam broken half way through and the chapel was closed for repair. The rebuilding raised the walls two feet, repaired the roof and installed new windows and doors.

The chapel was re-opened on Sunday September 27th 1857 with sermons by Mr Jackson and Mrs S Tubby of Briston. It is interesting to note that the 1857 preachers plan for the Briston circuit shows the services at Briston held in the open air.

Mr Jackson also adds a note about the recent formation of a society of 25 members at nearby Bintry.

The chapel was converted into a house in 1972. On Google Street View in 2009 the chapel is still in residential use and called inevitably “The Od Chapel”.