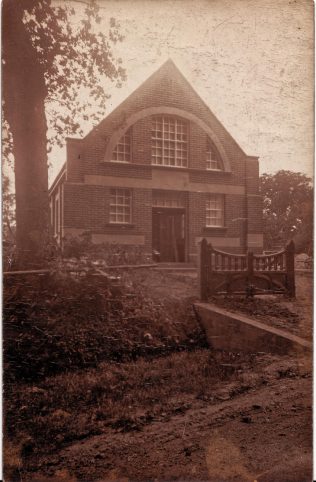 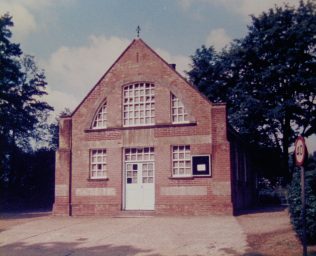 On 2 May 1775, a licence for worship was obtained by William Crisp, a grocer of Loddon and Methodist class leader there, for a ‘tenement or building in the occupation of John Thomas Corner, currier’ in Brooke. [i] This gathering did not last long.

A society associated with the Primitive Methodists made a very brief appearance in 1830-1.  It was back on the plan in 1837 and two years later a class of 12 was meeting on Sunday afternoons in a house which was also used for preaching.  A note against one of the names, that of Benjamin Harbour junior, a married man, cryptically states ‘fallen.’ This society lasted for three years.

The Rev. J.F. Smith of the Loddon Primitive Methodist circuit was asked by his Quarterly meeting to visit Brooke in September 1912 and try to form a society there.  He reported that no suitable place could be found for services, but the circuit persisted in its interest and the following year arranged for a mission van which was temporarily working in the circuit to visit the village.  Expenses were to be defrayed by circuit collections and any surplus money was to be reserved for future work in Brooke.

By March 1914, society stewards were appointed and efforts were made to find a site for a chapel.  Missionary services were begun the following December.  A year later ‘at the request of the Brooke society we arrange for afternoon services to be held there.’ [ii] Although no mention is made in the circuit minutes of a chapel, the first building must have been completed by 1919 when the circuit meeting met at Brooke.

The superintendent minister at Loddon, John Williamson, made a formal agreement on 23 December 1922 to purchase a freehold plot of land which had until recently formed part of the Brooke estate of Viscount Canterbury, from John Cobbold, a farmer in the village.  This arrangement was confirmed the following spring by the new superintendent minister, William Whittaker, and the land purchased for £60 ‘except for trees and underwood then standing on the land with liberty of ingress and egress into the land for agents, servants and workmen to cut down and with horses, carts, engines and otherwise to take away and remove the said timber, trees and underwood.’ [iii]

A chapel was quickly built with £250 secured by a mortgage.  Facing the Norwich road, it stood in front of the original chapel, which was to be used instead as a Sunday school, and was of red brick with a slate roof.  A large semi-circular window dominated the facade.

An attractive booklet with dark green covers and gold lettering was printed by the contractors, W. Wynes Brothers, as a souvenir of the opening of the chapel on 17 September 1924.  The sermon was preached by the renowned Congregationalist, the Rev. R.F. Horton of Hampstead, and the soloist was Mrs A. Rackham who, with her husband, was a stalwart in the circuit.  As was customary, a tea and public meeting followed the service.

Again, the circuit minute books made no mention of the opening of the chapel, but shortly afterwards the request of the Brooke trustees for a loan of £250 to pay for the building costs from the Church Extension Fund was ratified by the Quarterly meeting and forwarded to the District Building committee.

A rash of resignations at Brooke was a matter for concern in 1927.  The minister, Isaac Ashworth, who kept the circuit minutes, wrote only very terse notes with no explanatory details, but a deputation consisting of Ashworth and two others was sent to talk to the society and to those who had resigned.  A second deputation interviewed the congregation in 1930 when further difficulties arose and there was another exodus of members from the chapel.

A large crack was discovered above one of the windows in 1967.  It was caused by settlement and needed urgent attention, the inspection report insisted.  It was not dealt with, however, until 1971 and even then continued to cause structural problems.

In January 1976 the society was transferred to the Norwich circuit.  A new chapel, designed by Wally Thompson of the firm of Maurice Whalley and Partners of Lowestoft, was opened in 1990 although the old buildings were retained.  Grants were given by the circuit, the Connexion, the Hunter Rowe Trust and the Joseph Rank Trust as well as by members and friends who offered both their money and their labour.  The new building is light and airy with an interesting shape and makes a most attractive setting for worship.