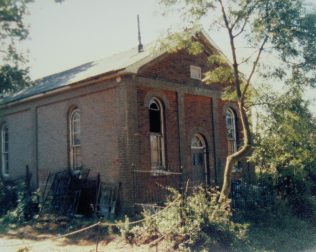 A preaching house in House Wood Lane was opened in the early nineteenth century.  Burgh-next-Aylsham Primitive Methodist chapel was opened in 1868.

It served until the 1960s and by the time of Keith Guyler’s photograph it was disused.  In Google Street View in September 2008 it is in use as a house.