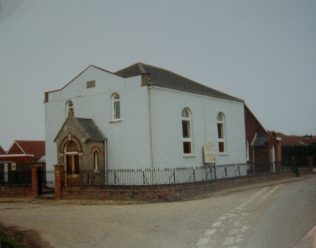 The Primitive Methodist magazine of May 1860 describes the enlargement at that time. The enlargement cost £120 and included raising the roof, adding a gallery and a pediment at the front and stuccoing the walls.

William and John Riches collected £75 (including £21 from a wealthy Yarmouth merchant) and Miss C Balls gave a pulpit cushion.. Rev J Venimore (Baptist) and T Lowe preached at the opening.

The chapel is built of rendered brick and a hipped slate roof. There is a tablet in the gabled parapet with the dates ‘1826-1929’