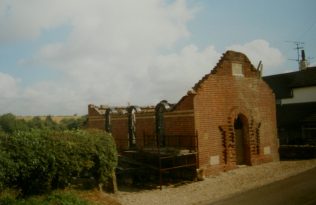 At the time of Keith Guyler’s photograph in 2000 it was unused and had lost its roof whilst it is being rebuilt as a house.

On Google Street View in 2009 it was its roof restored and the process of conversion is well underway.  Mind you, there does not seem to have been much change from Street View in 2008.  It looks as though it is incorporated in the land of the adjoining house.