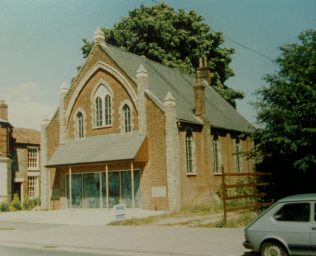 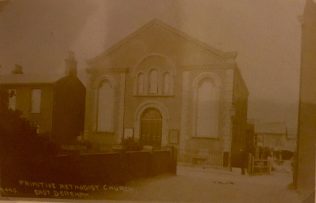 East Dereham Primitive Methodist chapel was in Commercial Road.  The Ordnance Survey one inch map of 1946 shows it sited just south of the junction with Norwich Street, in the area of the Orchard surgery.

The building in Keith Guyler’s photograph identified by him as East Dereham Primitive Methodist chapel was actually a United Methodist society. It opened in 1902 and served until the 1980s. According to the 1946 one inch Ordnance Survey map it was located on Norwich Road, just east of Dereham High School.  The postcode is NR20 3AU.  By the time of his picture in 1987 it was in commercial use. On Google Street View in 2008 it has disappeared, replaced with a detached house.

There are good descriptions on the history page of the current Trinity Methodist church website.  It includes the wonderful idea that the congregation in that former Wesleyan building should be encouraged to rise up into the roof along with the heat on chilly winter days.

Can someone confirm this please – the chapel identity, not the rising of the congregation.