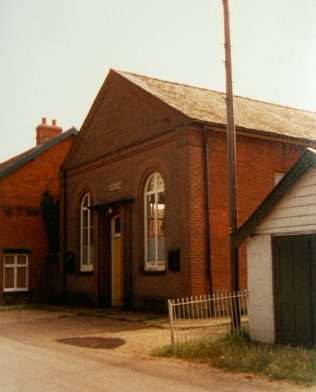 The society met previously in a part built former Wesleyan chapel – itself a converted house – opened in 1798, which they completed.  In 1862/3 the chapel and adjoining land was bought for the society by Rev John Allison. Foundation stones for the new chapel were laid by Mrs Samuel Youels and Mrs George Alderton. Mr Crook was the contractor. The new chapel measured 40′ x 29′ and cost £300.

A Sunday school was added in 1895. Keith Guyler’s notes say that in 1940 the chapel was listed as Wesleyan, but the photograph shows the Primitive chapel.