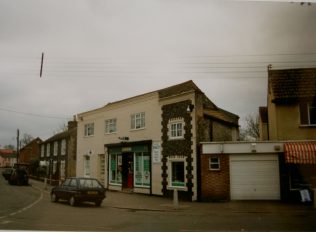 zoom
Shop identified by Keith Guyler as Feltwell Primitive Methodist chapel. However, it looks like he was mistaken here.
Keith Guyler 1996

The Primitive Methodist Society in Feltwell dates from 1838 and in time they built a chapel. In 1936, the village Primitive and Wesleyan societies joined in building a new Methodist chapel on Bell Street.

The picture by Keith Guyler is one of a series he took of former Methodist buildings across the country.  However, it seems that here he was mistaken. His photo, taken in 1996, showed a shop at 2 High St, Feltwell IP26 4AF. However, Viv Garner got in touch – see the comments below – to say that the shop, which was her family business, was a shop as early as 1851.

So where was the Primitive chapel? Viv suggested it might have been where the Fish Piper on High Street (formerly Cock Street) is. On the 1884 Ordnance Survey map, the Primitive Methodist chapel is shown on what is now Payne’s Lane, by the entrance to Vincent Close. But the odd thing is that by the 1905 map the label has disappeared, although many building footprints stay the same, and I cannot find a chapel marked elsewhere in the village.  What happened to the chapel? Any suggestions?