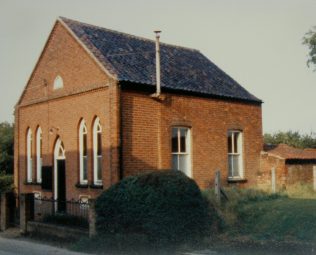 The Fulmodeston Parish website says that “the present chapel was bought by the Primitive Methodists in 1865 but there is evidence that the building was already being used for Methodist worship at the time of purchase. The chapel was extended in 1902 and, apart from the introduction of electricity for lighting and heating, it remains pretty much as it was then.”

GenUK says that the chapel was founded in 1849, so you can take your choice.

The chapel is still in operation in 2015.