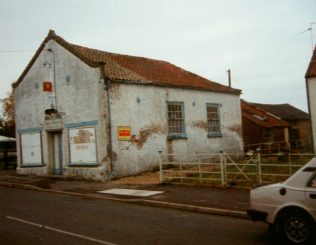 Hilgay Primitive Methodist chapel in London Road dates from 1838. It served until the 1950s and after closure was used as a shop.

By the time of Keith Guyler’s photograph in 1993 it was derelict and for sale.

On Google Street View in 2009 it is not possible to recognise it; there are new houses at its grid location. On Google maps there is also a building called Primitive Cottage close by.