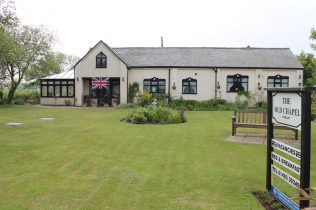 This building is situated on the main road out of Horsey village towards Sea Palling.

It was the second Primitive Methodist Chapel in Horsey, built in 1910. It was sold and converted into houses for farm workers when the current Methodist Church was built in 1958.

It is now a hotel called ‘The Old Chapel’.

The history of the Primitive Methodist Chapels in Horsey can by found on the Horsey Village website.

Primitive Methodists began meeting in a farm house, where Hugh Bourne preached in the kitchen in the 1840s. The first Chapel was built in 1870.

By Val and Peter Branson