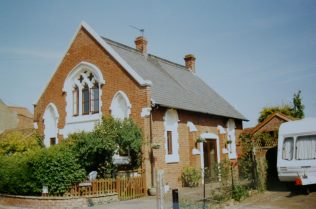 Lenwade is north west of Norwich.  Lenwade Primitive Methodist chapel was opened in 1905 and served until the 1970s.

By the time of Keith Guyler’s photograph in 1998 it had been converted to a house called Blessings.  It is still in that use on Google Street View in 2009.