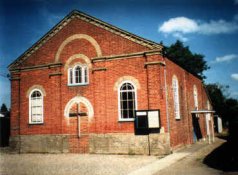 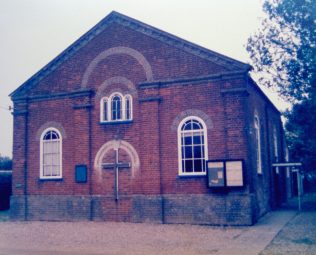 A Methodist society was first established in Lingwood when a licence for religious worship for the house of Thomas Whinter was granted on the 7 June 1799.  The applicant was the Wesleyan senior itinerant preacher in the Norwich circuit, James Anderson.  No further information about this society exists.

A Primitive Methodist plan lists a society at Lingwood in the winter of 1830-1 when there were six members as well as four ‘on trial.’  Support in the village must have been positive for the Circuit Committee meeting of 8 April 1835 directed that ‘Brother Garner see after a Chapel at Lingwood’ and that he ‘have liberty to make such arrangements about the Chapel as he think will sute.’  Five pounds was to be the limit of the yearly rent and ‘it is thought provident to take it for seven years if Brother Garner succeed.’ (1)

Clearly Brother Garner was successful in renting the chapel for the sum specified for the next Circuit Committee meeting in July decided that one of the current itinerant preachers, James Moss, and his wife should go to Lingwood to open the chapel officially.  This building has since been turned into three cottages.

Eight months later, the meeting of the Quarter Day Board ordered that Thomas Hinds, a local farmer, was to be removed from his office of chapel steward, but no reason is given for this action.  It also ordained that ‘Mr and Mrs Crane have a seat in Lingwood Chapel and let the other Seats at 9d each and give it to the Committee.’ (2)  Jacob Crane and his wife kept a shop in the village.

In 1851, the return of Lingwood Primitive Methodist Chapel in the Religious Census recorded that 50 people attended morning and 130 afternoon worship.  There were no evening services.  The chapel contained 60 free seats, 60 for rent and space for 50 or 60 people to stand.

A new trust was formed in 1866 comprising two labourers, a gentleman’s servant, a farmer, a plate layer, a rat catcher, a blacksmith and two boot makers.  They supervised the building of a new chapel on a small site of 30 yards by 20 yards.  Built by John Withers of Blofield who had submitted the lowest tender, it was opened on 4 October 1866 by Robert Key.  It contained 170 seats for rent and 50 free seats for the poor.  A debt of £180 remained on opening day from total building expenses of £287.12.6d.  This was paid off only slowly and in 1873 £160 still remained to be cleared.  At that date there were 39 members in the society although the average attendance at services was estimated to be 200.

The wide red brick building had a pleasant aspect with dentilations along the gable roof line.  Two tall pilasters framed the doorway which had a broad band of framing immediately above it and two semi-circular bands high in the facade above a triple window.  A round-headed window was positioned each side of the door and there were taller round-headed windows along both sides.  It was roofed with best Countess slates.

Within, the walls were plastered with stucco which was jointed to imitate stone and a triple sham window was placed at the back of the rostrum which had stairs at each end.  The sash windows and the fanlight were of best crown glass with stained glass round the margins.  A red deal floor was installed throughout the entire chapel.

A Sunday school was begun in a building at the end of the chapel.  Proving inadequate, it was replaced in 1878 by a building designed by A.F. Scott.   In 1870 it had five teachers and 40 pupils.  By 1876 the number of teachers had doubled and there were 61 scholars.  In the early 1980s there were still 60 children on the register although now there are only four.

The anniversary service, always a high point of the year for every chapel, was particularly attractive to the Lingwood congregation in 1933 when Willie Long of Sheringham, a fisherman and ardent Methodist, conducted the anniversary services.  He also delivered the Monday lecture when he took as his subject ‘From fishing boat to pulpit’ and then sang a hymn as a solo by special request.

The building was extensively renovated in 1975 in a way which made the chapel smaller and enlarged the Sunday school.  Much of the new chapel furniture was donated by members of the congregation whilst the old pews and pulpit were made into equipment for the Sunday school children.

In October 2001 the chapel was transferred to the Acle circuit after 200 years as a member of the various Norwich circuits.