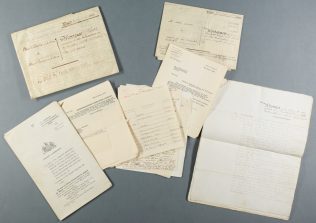 Primitive Methodists began meeting in a barn in Little Walsingham, belonging to John Groom of Great Walsingham.  The barn, which they used as a chapel and school, was on the north side of Swan Entry, and had an adjoining stable with a small piece of land to the east.

In 1848, it was given or sold to the trustees of the Chapel, who were Robert Towler, William Purdy, Robert Woodcock, Charles Dawson, Robert Mays, Benetine Chesney, Thomas Walker, Thomas Parker, John Cushing and William Barnes.

In 1858, the Chapel was mortgaged by the same trustees (except Charles Dawson), for £180, to the trustees of the Rock of Hope Lodge of Odd Fellows, South Creake.

Consent for the sale of the chapel was agreed by the Methodist Conference in 1935, and was bought by George William Faircloth in 1938, to be converted into a house.

Notes by Norman Faircloth (grandson of George William Faircloth) about the history of the PM Chapel, including a sketch floor plan of the chapel showing how it was converted to living accommodation; Norfolk Record Office, MC 3178/2, 1038X9 (deposited July 2015).