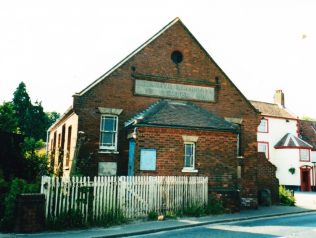 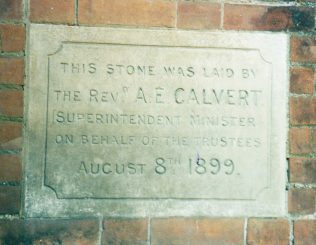 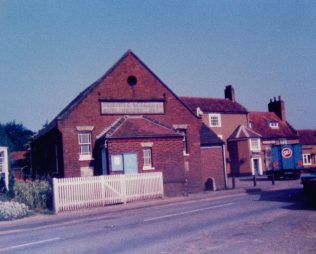 Although Mulbarton was amongst the first group of societies to send quarterly contributions to the Primitive Methodist Circuit funds in 1823, it then disappeared from the records until 1837 when the circuit proposed that a room be sought for regular Sunday services.  This proposal was crowned with success and the Quarterly Meeting in June 1838 heard that the house of David Spurgeon junior had been secured for worship.  The arrangement, however, did not last and two years later the circuit was once again looking for a base.  A place was eventually found and the congregation asked if it would be responsible for the weekly shilling rent, but were warned that if they declined then preaching would have to be conducted in the open air.

Clearly the congregation turned down the proposal for nine months later the Quarterly Meeting decided that preachers should continue to be planned for Mulbarton ‘in case a House be providentially opened.’ (1)  The following March the village was missioned in order to reconstruct the congregation, but in spite of all these efforts, the June 1841 Local Preachers’ Meeting removed Mulbarton from the plan as all their endeavours had met with no success.

Back on the plan briefly in 1850-1 and again in 1861, the Methodist cause at Mulbarton made no headway during these years.  Then in 1872 the report of the Queen’s Road Primitive Methodist Circuit to the District meeting recorded that Mulbarton had been missioned and a society of nine members had been formed.

Plans were made in 1898 to build a chapel in the village and the Quarterly Meeting of March 1899 heard that trustees had been appointed and sanction was given for the purchase of a suitable plot of land.  Foundation stones were laid on 8 August 1899 by Mrs Murrell, wife of Councillor Robert Murrell and trustee at Queen’s Road, Mrs D. Warn and Miss Kate Hollidge, wife and daughter of two other Queen’s Road trustees, Mr W. Spurgeon, Mr A. Green and Alfred Calvert, circuit superintendent minister.  The Eastern Daily Press in reporting the event noted that £40 was laid on the stones for the benefit of the new chapel.

The opening celebrations on 16 November 1899 went unrecorded in the minutes of the Quarterly Meeting which at this time was almost entirely preoccupied with the proposed Scott Memorial Church in Thorpe Road.  It was not reported either in the Eastern Daily Press usually assiduous in noting the opening of new chapels, but which in these weeks was almost wholly concerned with the fighting against the Boers, Kitchener’s campaign to avenge the death of General Gordon in the Sudan and the visit of the Kaiser to Windsor and Sandringham.

The freehold building on a sharp corner of the village street and next to the World’s End public house was set on part of an orchard belonging to the windmill.  It proudly proclaimed its presence in the centre of the community as the days had long gone when a discreet position on the village outskirts was needed to avoid public hostility to Methodism.  The simple red brick building was lighted by sash windows.  Hidden between the frame and the window was a paper on which was written the names of the original Trustees and this was recently discovered during alterations.  Foundation stones were set either side of the entrance and at the rear four other stones were placed as well as several painted bricks with names carved on them.  There was a stable for the visiting preacher’s pony.

The chapel had 150 sittings and cost £292.  The debt still outstanding when the chapel was completed was £140.  No doubt the effort to build a chapel at Mulbarton was felt to be particularly desirable as successive ministers had struggled to obtain a building plot for the society in nearby Braconash for years, but without success.  From April 1900 Mulbarton Chapel replaced the rented accommodation at Braconash on the preaching plan.

Within a short time there was a Sunday school with four teachers and 32 scholars, a Band of Hope with ten juvenile and five adult abstainers and a Christian Endeavour society with ten members.

In spite of a week’s mission in September 1910 when 1000 handbills were distributed and the subsequent appointment of a mission band to work there, over the next few years numbers at Mulbarton gradually fell, the result the Superintendent Minister felt, of the pressure brought on people by the Anglican church and by people moving out of the village, particularly farm workers taking employment elsewhere.  Band of Hope members also declined:

The drink problem is not so acute in the villages and the need of total abstinence is not realised.  Many of our chief workers drink at least ‘home brewed’ and the children generally are scattered over too wide an area to attend meetings at night. (2)

By 1925 the Sunday school had only one teacher and ten children although this rose to 28 scholars with four teachers in 1931.  The chapel had 25 adherents, a number which had remained steady over the previous eleven years.  Early in the 1930s the chapel and Sunday school were helped by several young men from Queen’s Road until they were called up for war service.

By the 1950s, the Superintendent Minister felt that as numbers were so low, closure was inevitable, but, persuaded by the Mulbarton steward Arthur Bobbin, the circuit agreed that it should remain open.  The Bobbin family had provided great help with the chapel in many ways ever since they transferred their allegiance to the Mulbarton Methodist cause on the closure of the nondenominational chapel at Swardeston which they had previously attended.

In the 1960s the chapel flourished.  Several other families from Swardeston attended, a Women’s Bright Hour began and the society grew strong, but this success did not last.  Numbers slowly fell until in 1993 services ceased in the chapel and were transferred to the village hall.  Gail Clifford was appointed as lay worker, but soon attendance was so low that the circuit decided services would cease and arrangements were made to transport the remaining members of the congregation to Chapelfield Road Methodist Church.  The last service was held on the 26 November 1995.

The building was sold and converted into two flats.  One of the workmen engaged on the job is a descendant of the Bobbin family which with others worked with so much devotion in the life of the chapel in earlier years.