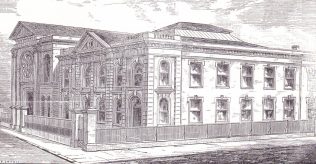 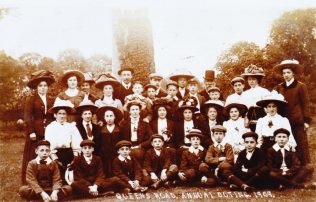 zoom
One of the boys' classes with their teachers and Sunday schoolofficials from Queen's Road on their annual outing in 1909. 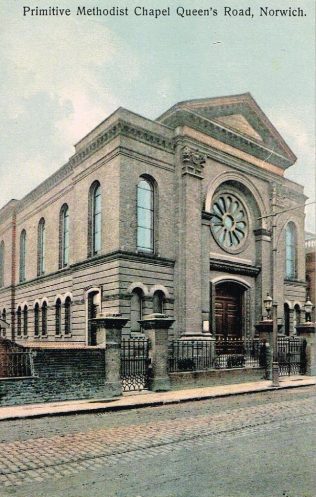 With the flurry of activity which accompanied the introduction of Primitive Methodism to Norwich, a number of cottage meetings were held in the city.  One, at Lakenham, was so successful that a loft was hired for services and in 1823 a simple chapel for 500 people was built at a cost of £360.  It was situated in a secluded situation in a loke off Hall Road which was then known as Hall Lane and near Ber Street gates in the general area known as Peafield.

Right from the beginning, the chapel was popular and very overcrowded and from 1830 onwards, collections were ‘Given towards a Larger Chapel.’ (1)

A fragment of the first account book has survived and gives details of income and expenditure from 1822. It shows that £7.5.9d was paid for ‘Furniter’ for the preacher, William Dawson, whilst a constable was employed to protect the congregation from disturbances by rowdy onlookers who gathered outside the building.

There is no indication as to where precisely the preacher’s house was situated though there is an entry for 15 September 1828 recording the disbursement of three shillings for ‘carting preacher’s furniture to Lakenham.’  It was clearly a rented property as there are a number of references to the payment of rent to ‘Sister Took’ as well as fifteen shillings for the ‘Preacher’s Bed’ paid to her on 10 March 1823. (2)  About this time, a Mary Took owned a shop in Ber Street, so it is possible that it was she who was renting the house to the Primitive Methodists.  Certainly the preacher would want to be near the chapel and from Ber Street it was a walk of only four or five minutes.

The impression from the accounts is that money was scarce and it was often the preachers who suffered from any deficit which arose – at times payment of their wages was in arrears whilst cast-off items of furniture were collected from around the circuit for use by their families.  In June 1831 the account book records purchases made for the preacher’s house as well as for repairs.  After this expenditure, it was felt important to keep a close eye on the property of the house for fear that items might be taken away inadvertently when the preacher moved on.  A very precise inventory was taken which even included ‘1 spoon (broken).’  The accounts show that the minister is, from this time, regularly charged one shilling per quarter ‘for the use of the Furniture’!

The urgent need for more accommodation spurred the congregation to extend the chapel in such a way that it entailed a virtual rebuilding in 1832.  Next to it was built a Sunday school and there was also a graveyard on the site.  The preaching plan published immediately after the completion of the building contained a poem of celebration written by J. Huggins, a local preacher.

‘Full nine years ago a house there was rais’d,
Which soon was too small (to God give the praise),
We took down the small one to build one more large:
’Twas only a duty we had to discharge.

The preacher and leaders and members also,
With hearers and strangers whom we do not know,
Have taken a part in this labour of love,
To raise up a house for our God whom we love …..’

Lists of class members for 1833 have notes written against some of the names – ‘fallen’ appears several times as well as ‘fallen awfully.’ (3)  Minutes of Local Preachers’ meetings and Quarterly meetings in the 1830s are full of complaints against local preachers for neglecting their appointments and finally it was decided to move them down one place on the plan as a punishment.  Other members of Lakenham chapel, some of whom were local preachers, came in for censure – Charles Scarlett ‘be no longer a member of Society except he can prove he is a married man.’  Another is suspended while he gathers evidence for himself and ‘the young Woman’s Character be enquired after.’ ‘Brother Warnes come off the plan as he will not answer to the Questions put to him on doctrine’, another is censured for his Calvinistic views, a third is ‘permitted to preach in the Chapel, but not to sell his hymns on the Sabbath’ whilst ‘Brother Scarles be admonished for his Conduct on the Hill at the time of the Elections.’ (4)  In 1838 the Quarterly Meeting directed the minister to speak to the Lakenham choir for their disorderly behaviour.

The conflict between the obligations of employment and Sunday observance is illustrated by a comment beneath the list of members of the Sunday afternoon class which met in the chapel vestry -’Many of those members are servants and cannot attend Class every Sunday.’ (5)

The return made by one of the trustees to the Registrar General for the 1851 Religious Census showed that 267 people attended morning worship with 274 in the afternoon and 353 in the evening.  He estimated that these were average attendances.

The minister at the chapel at this time was the charismatic Robert Key.  An uneducated coal heaver from Yarmouth, he fell in with a rough gang of drunkards, gamblers and cockfighters, but when several of them broke into a house and were arrested, tried and transported, Key was so shocked that he seriously reviewed his life and shortly after was converted by a Primitive Methodist preacher.  Straight away he was given permission to go out as a local preacher and immediately his fearless, forthright manner achieved remarkable successes.  He became a travelling preacher in 1828 although misgivings were felt about his suitability for the task.  In the event, his missionary work, mainly conducted in central Norfolk, led to the conversion of thousands and he is credited with transforming the lives and morals of many of the most degraded members of society.  He was a magnetic speaker and people travelled great distances to hear him speak at camp meetings and also in large chapels of various denominations. He was appointed as one of the preachers at Lakenham Chapel for the connexional year 1850-1 and it was noted that regularly every seat was taken a full hour before the services began.  He was stationed there again in 1863, his last full-time post.

Elizabeth Bultitude was another of those whose fame spread beyond Norwich. Converted at a Primitive Methodist camp meeting on Mousehold Heath, she then attended Lakenham chapel.  She had become a local preacher by 1831, preaching her trial sermon in the chapel and in 1833 began almost thirty years as a travelling preacher, eventually retiring to Norwich.  Well-known for her old-fashioned dress and blunt manner of speaking, she continued to preach for many years.  Her picture shows a grim-faced woman with a disapproving down-turned mouth.

Always suffocatingly crowded, the chapel was eventually declared to be totally inadequate.  Land on Queen’s Road – formerly known as Brickmakers’ Road – was bought for £200 and the Norwich architect Edward Boardman was engaged to draw plans for a new chapel.  The foundation stones were laid in May 1872 by Samuel Jarrold and others whilst the building was opened on the 30 December of the same year.  It was not before time for shortly after the move had taken place, the gable of the old chapel collapsed.  The Norfolk News reported the ceremony which was attended by the President of the Primitive Methodist Conference, describing the chapel as having ‘more pretentions to architectural beauty than any other building in the city belonging to the Primitive Methodist Connexion and is an ornament to the gradually improving neighbourhood in which it is situated.’ (6)

The heavy Corinthian pilasters on either side of the main door and the pediment gave a classical flavour to the design which was built of white brick with York stone dressings and brick cornices.  It had a large central entrance approached by a shallow flight of steps with cast iron railings and gates in front of the chapel.  There was a large wheel window above the doorway which was recessed within an arch.  A string course with a carved frieze stretched above the doorway.  Entries to the galleries were on either side of the building where there were also two tiers of round-headed windows. The brickwork of the lower part of the building was rusticated.

Inside, at the far end of the chapel, the pulpit and rostrum were placed within an apse.  The gallery was fronted by open gilded ironwork and supported by iron pillars.  A harmonium was provided for music.  The cost of the building was £2300 and immediately it was filled to capacity.

The Sunday school was situated beneath the chapel. It was dark and excessively overcrowded for the very large number of children who met there.  A new schoolroom was urgently needed and in 1887 a large Sunday school, designed by A.F. Scott, was built next to the chapel on its northern side.  With a rusticated exterior of white brick, it, too, had a classical air.  Its round-headed windows were set with keystones and there were stone flowers and leaves in the corners.  The heavy double doorway with carving in the spandrels below and a roundel above in the centre of the facade with the date 1887, was topped by an elaborate roof with slates and with a ponderous entablature and mouldings.  Seven pilasters ran along the facade.  The inscription on the foundation stone, laid by the minister, the Rev. C. Bell, on behalf of J.J. Colman, M.P., is now obliterated.

Inside, there was a gallery on all four sides supported on wrought iron spandrels and two pillars and with an elaborate wrought iron front.  Rooms opened off the central area on both levels. The two new imposing buildings demonstrated the rising finances of the congregation.

Two incendiary bombs fell on the chapel in the air-raids on Norwich during the Second World War.  Little serious damage was done thanks to the prompt actions of a warden who had once been a Sunday school scholar at the chapel.

Lakenham Old chapel and then Queen’s Road had led a circuit right from the beginning.  After Methodist Union in 1932, Queen’s Road remained at the head of one of the five Norwich circuits, but with the gradual loss of population in the area, together with the close proximity of Chapel Field Road chapel, the shrinking congregation could no longer make the huge chapel viable.  It was closed in 1952.

The building was then used for various purposes.  Most recently it was adapted for offices whilst the former Sunday school building has been used as a carpet warehouse and then a gym.  The shells of both buildings remain largely unaltered and are an interesting feature of the townscape in this part of Norwich.