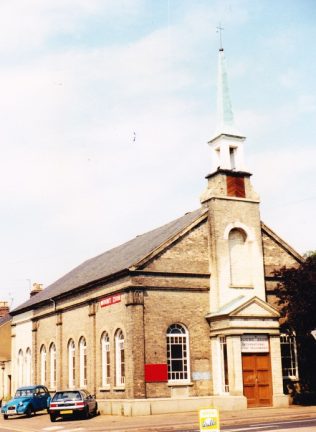 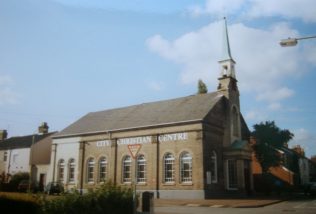 During the 1870s the area between Dereham Road and the River Wensum was quickly built up with working class houses in narrow streets.  Seeing it as a new area for mission, the Queen’s Road Primitive Methodist Circuit arranged for a number of young people from Dereham Road Chapel together with their minister to begin a series of open-air services, the first of which was held in a potato field on the corner of Nelson and Armes Streets.

Promising progress encouraged the circuit to hire a cottage opposite the Dolphin public house for services.  Then, the field which had been the location of the first service was put on the market and quickly bought for the site of the new chapel.  Its cost was £202.10.0d.

The foundation stones were laid on the 26 November 1878 by J.J. Colman, the former Norwich M.P. and manufacturer who made a gift of £100 to the new chapel and promised £10 more for every £40 raised to clear the debt.  The other stone was laid in memory of the late Thomas Jarrold, printer, publisher and indefatigable Sunday school worker who had died the previous year.  Fifty pounds was given by his family and the stone was laid by one of the circuit stewards and the three circuit ministers.  One of these, Jabez Lincoln, was only twenty-one years old and bright with hope at the beginning of his first appointment.  Three years later whilst stationed at Bury St Edmund’s he became so ill mentally that he was admitted to Ipswich Asylum and was eventually forced to resign from the ministry.

The church was built for £844.14.4d by contractors who were also members of the congregation at Dereham Road.   The completed building was opened early in 1879.  Built of brick, it had a round-headed main doorway with a window on either side of the entrance.  Three sets of double windows ran along each side of the building.  The pitched roof had a wide border along its gable front with a central circular window.  There was a large name plate above the entrance.  A photograph of 1934 shows the church without the slender spire which tops it now.  It was a simple building, but the debt entailed was a heavy burden to the congregation for several decades.

Efforts were repeatedly made to deal with the debt.  The Quarterly Meeting of September 1891 ordered that ‘each of the city choirs be asked to give a Service of Song or concert in aid of Nelson Street Chapel funds.’ (1)

A Sunday school was added in 1884.  The Norwich Sunday School Union report of 1905-6 recorded that Nelson Street had facilities for 100 children, yet there were 203 names on the registers.  There were also 16 teachers.  The report also noted that an enclosed lawn had been laid out by the chapel so that the children could be taught in the open air in fine weather.

In spite of the flourishing Sunday school, the fortunes of the chapel fluctuated wildly in accordance with the various personalities associated with it.  Money was a constant problem.  The Norwich Methodist Magazine reporting on a sale of work in December 1935 said the visitors who opened the bazaar ‘seemed to understand the difficulties and to see the real beauty which lies within our sanctuary in spite of the need of repair and decoration…’  The correspondent went on to say ‘The financial report of our secretary showed our almost bankrupt position as regards church funds with two rather heavy bills to meet.  These financial problems lie heavily upon us.’

During the Second World War the chapel suffered bomb damage and the congregation was dispersed.  It never again came together in sufficient numbers to repair and maintain the chapel and so it was sold in 1950 to the Church of England for use as parish rooms and the money the Methodists received as compensation for the war damage to the building was used to help build Wroxham Road Methodist Church.  It was during the time that the chapel was owned by the Church of England that the spire was added to the building.  Subsequently it was sold to various evangelical groups and is now used as the ‘City Christian Centre.’