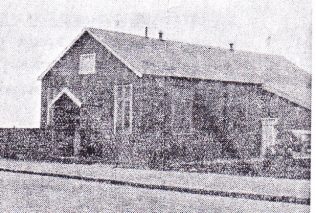 Soon after the Scott Memorial Primitive Methodist Church opened in the early years of the twentieth century, the minister and congregation began to consider forming a society in the new housing area of Plumstead Road.  Open air and cottage meetings were successfully organised and in the climate of interest generated, a site was bought with a grant from the Primitive Methodist Connexion and, after many problems were faced and overcome, a small hall and room were erected at the top of Kett’s Hill and opened for worship at the beginning of 1910.  Built of corrugated iron, it was fondly known as ‘The Tin Hut.’  The building cost £250 and the land on which it stood £200.

Two months later, a Sunday school was set up with just seven children, but within two months the numbers had increased tenfold and by the following year reached 200.  Another room was built, but the premises still proved to be inadequate and even in 1934 when Sunday school numbers were beginning to decline nationally, there were 200 children’s names on the registers.

Shortly after the opening of the chapel, a ‘Sister of the People’ was based at the church.  Her presence helped to compensate for the absence of the minister who had volunteered to serve as an army chaplain during 1915 and 1916.

The tragedy of the war was brought with immediacy to the congregation when one of its young men, John Henry Mallett of the Royal Army Medical Corps, was killed leaving a widow and two young children.  Following the telegram with news of his death came a letter from one of his officers who wrote that he had died of wounds received ‘by the exploding of a shell…. while collecting and tending the wounded on the battlefield with his comrades.’ (1)

A building fund was set up as it was soon clear that the church could not fully serve this rapidly expanding suburb and that a larger building was badly needed.  Progress was very slow, but by April 1935 the church correspondent to the Methodist Magazine expressed the hope that the new building would be completed within eighteen months. A post card was designed showing a drawing of the proposed church with details of the scheme to finance it, but although the building fund grew significantly in the later 1930s, it was still not large enough to embark upon a new church.

Then, in June 1940, the chapel was bombed and completely destroyed.  Services continued using first a requisitioned hall on Kett’s Hill and then the local library as a temporary home.  Faced with the need to rebuild the church to provide for families moving into the new houses in the area, the trustees were forced to acknowledge that the old site was too cramped for their ambitions and so, in March 1944, land was bought for £550.  It fronted Heartsease Lane and a new road, Orchard Close.  The map accompanying the land conveyance showed that it consisted of eight small adjoining plots originally intended for houses and gardens straddling the city/county boundary.  In August 1946 a temporary wooden church was opened standing at the back of the site and in 1949 a nissen hut was added to accommodate the Sunday school and provide for youth work in the locality.

The stone laying ceremony for the permanent building was held on the 12 September 1953.  Various church groups laid stones and others were laid in memory of members of the society who had died.  In addition, the Lord Mayor of Norwich, R.H. Mottram, magistrate and Norfolk historian, and the Chairman of the East Anglia Methodist District, Alan Roughley, each laid a stone.  Bricks were added by the three oldest members of the congregation.  The completed building was opened on the 20 March 1954 by Viscount Macintosh of Halifax.  Its cost was £12,614 and considerable help was given towards this bill by the Joseph Rank Benevolent Trust and by the Norwich Methodist Circuit which donated part of the money raised from the sale of Queen’s Road Chapel.

In September 1961, Lord Macintosh was again at Heartsease Lane when he opened the new school hall which had been designed by C.H. Dann.  Once more the Joseph Rank Benevolent Trust provided a substantial sum with lesser grants from the Circuit Building F und and from the Connexional Department for Chapel Affairs whilst £3400 was raised locally by the congregation and friends of the church.  Further extensions were opened in March 1968.

Following the closure of Scott Memorial church in Thorpe Road in 1985, Heartsease Lane welcomed members from that congregation, so uniting in fellowship with the descendants of those who had originally founded the ‘Tin Hut’ at Plumstead Road.