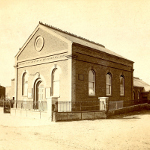 With the feverish expansion of the Norwich Primitive Methodist circuit in the later 1830s, Sprowston was seen as a suitable area to mission.  Services were held on Sundays in the house of a Brother Woodhouse and during the week in the home of Brother Porter.  It was hard, however, to attract a congregation and so a praying company was sent along with each appointed local preacher.

The society grew sporadically.  It sent occasional sums to the circuit funds; failure was not always caused by the poverty of the congregation – in 1838 the Quarterly meeting agreed to ‘forgive Bro. Jessup 2/9d belonging to the Sprowston class of which his house was robed (sic) while he was out preaching in consideration of his past services and present painful circumstances.’ 1

This society failed to survive, but in 1869 a further attempt was made to mission this part of the city.  The neighbourhood was notorious for its lawlessness and poverty and brickworks were common, with many poor houses for the workers and their families.  It was difficult for a Methodist society to become established, but once the initial problems were overcome, the congregation began to grow.

One of the earliest houses used for meeting was in Sidney Row and then a lean-to room belonging to a family called Holborn on Sprowston Road.  After some years, part of a large orchard on the corner of Sprowston Road and Shipfield was bought for £40 and a chapel built.  The foundation stones were laid on the 16 April 1875, one of them on behalf of the Norwich philanthropist and mustard manufacturer, J.J. Colman, M.P. and the new chapel was opened on 29 July 1875 with a sermon by Robert Key.

The society had 37 members and an average Sunday congregation of 170.  The plain brick chapel had a neat look with round-headed windows and doorway.  Its cost was £417.8.5 1 /2 d of which £250 was borrowed at 5%.  It seated 200 people and the whole was surrounded by a low wall topped by iron pallisading.

A Sunday school, originally begun by Baptists in a cottage in Wall Road, was transferred to the Methodist society.  It continued to meet in the cottage until 1878 when it transferred to a building behind the chapel.   It had 93 scholars and 18 teachers and by 1882 this had risen to 22 teachers with 103 children.  The Sunday school choir regularly sang at the adult services and for a while it even boasted an orchestra which performed at anniversaries and other special events.

The chapel and its congregation seem to have had a chequered career at times. In December 1883 the circuit began inquiries into unauthorised collections there. The same meeting heard a report respecting George Want, one of the congregation, and concluded he had ‘been indiscreet in being unnecessarily familiar with Jane Harrison, but that there is not a fragment of evidence in supporting the foul aspersion of criminal wrong insinuated in regard to him.’ 2  In addition, two of the chapel officials had fallen out, so that one refused to produce the key to the cash box and in frustration the other had broken it open with considerable violence. Meanwhile a Mr F. Tilney had resigned his class membership after being found ‘guilty of immorality. Miss Atkinson of Sprowston has separated from the society on the same ground.’ 3    The leader and assistant leader of one of the Sprowston classes were removed by the Quarterly meeting in 1885 for negligence of their duties and by 1890 things were in such a state of chaos that a circuit deputation was appointed to manage the affairs of the chapel.

Great efforts were made over the years to clear the debts on the building, but in an area where earnings were low, this was a constant struggle. With help from a legacy and with great celebrations, the congregation finally freed itself from debt in 1921.

Junior and Senior Christian Endeavour societies were formed, growing out of the original Guild organisation which had been in operation since 1916.   From these beginnings, several young men became local preachers and some are still preaching now.

Extensions to the Sunday school had been planned since 1908, but were repeatedly postponed for lack of money. Finally in 1924, the extra rooms were built to cope with the ‘extreme overcrowding of scholars in the present buildings’ 4  whilst a pipe organ was bought for £50 in 1941 from Plumstead Road chapel to replace an old harmonium given in 1895 by Miss Calver, a generous benefactor to the chapel and congregation.

In 1928 the Sisterhood was formed.  There was also a Boys’ Brigade and a Girls’ Life Brigade.  In addition, a strong Brotherhood was formed which used to perform in the chapel and also went to other churches with their singing.

Money was raised through bazaars and the highlight was the harvest festival when produce from gardens went to decorate the chapel and then was sold on the following evening by auction. This brought in a considerable amount of money which was badly needed to keep the chapel running and in good order.

From 1946-9 the schoolroom and vestry were rented by the Education Committee for £2 a week for classes for 27 boys and girls.

After the Second World War, the trustees began to consider the possibility of moving into the heart of Sprowston.  A suitable site was purchased in the summer of 1949 for the new Wroxham Road Church.

With money raised by the church, war damage money from Nelson Street and Cowgate  chapels, part of the proceeds from the sale of Cowgate Street and Queen’s Road, £3000 from the Joseph Rank Benevolent Fund, contributions from the Methodist Chapel Fund and from the circuit and money raised by the congregation, £13,000 was accumulated.  The church was built in 1958 with the stone laying ceremony on the 10 May and the opening on the 20 September.  The builder was W.S. Lusher and Son and the architect was Clifford Dann.  The door was unlocked by eighty-two year old George Barker, a life-long member of the Shipfield chapel. It was a wonderful day for Sprowston Methodism and the St Peter’s circuit.