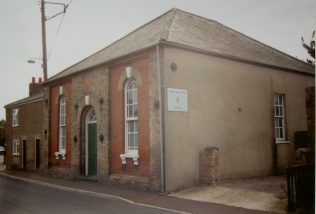 From 1834, Outwell Primitive Methodists held services in the bottom of a large warehouse most of it without a floor. Then, as they couldn’t obtain a site for a new chapel, the trustees agreed to lease it on reduced rent and laid a new floor elevated at each end with free seats on the level . The re-opening was on Sunday April 30th 1837. On 7th May James Garner (who reported the occasion in the Primitive Methodist magazine) started a Sunday school with 79 children

In the Primitive Methodist magazine of 1866, Rev J Scott tells us of the re-opening of the chapel after thorough cleaning and repainting of the chapel, school room and house.  Names included Rev J Scott, Mrs Lee (Lynn) and W Goddard.

It served until 1963 when it was one of three Methodist congregations which combined to form St. Andrew’s Church.

After closure it became the headquarters of the Air Cadet Force.  On Google Street View in 2009 it has become a four bed-roomed house.