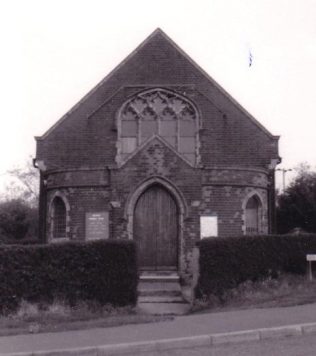 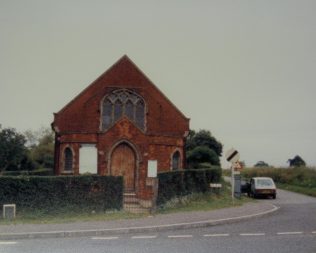 Although tradition tells that a Mr Hood held services in his own cottage in Postwick in 1847 and was ejected by his disapproving employer for doing so, it is hard to reconcile this with the facts.  A Peter Hood was included in the 1833-4 class list, but he has gone by the following year and does not appear again whilst in the late 1870s a William Hood was appointed secretary to the trustees and seat steward, but by this time the society had been meeting in a purpose-built chapel for some twenty years.  Perhaps the society met at his house immediately before the chapel was built.

In fact, Postwick was listed in the first surviving list of Norfolk Primitive Methodist societies which sent in class meeting money in September 1823.  Services were held at 2 o’clock and 6 o’clock on Sundays, circuit camp meetings were held there and the society sent regular quarterage payments towards the sustenance of the travelling preachers.

Numbers given for Postwick in 1831 show that there were nine members in the society and two years later this had risen to 25 as well as a junior class of three girls.  On the next list the Superintendent Minister has noted that there were two local preachers at Postwick, Thomas Adkins and Benjamin Smith (who led the class) and 14 members – ‘There are 28 names in the Book of this class.  I could not assertain [sic] that any attended beside the above, there being no class Paper to advert to.’ (1)   In 1837 there were only 12 members and one local preacher and then inexplicably the society does not appear in the list of  l839.

A small chapel was built in 1847 in Boundary Lane. The trustees decided that ‘the  Building to be Made as high as possible with Stone and brick – the Rest with Clay’ and ‘that the Chapel stand with the End next to the Road.’ (2) It contained 140 seats, 76 of which were for rent. Although there were just 15 members, 70 people regularly attended services.  The cost of the building was £69.9.10d and £60 of this was owed when the chapel was opened.  In 1873, £25 of this debt still remained.

The return made to the Religious Census of 1851 stated that 18 people were at morning worship, with 103 in the afternoon and 32 in the evening as well as 40 Sunday school scholars. Evening attendants over the last six months had averaged 100, but there is no indication as to why the evening attendance on census day was unusually low.  The form was signed by Robert Key, superintendent of the Norwich Circuit.

In March 1889, the District meeting noted that the Rev. Nathaniel Davenport was to investigate the finances of Postwick Sunday school which had reached a low point of 16 scholars.  No further details of the investigation survive, but the fortunes of the Sunday school then improved dramatically and two years later there were 38 scholars.

The Station Report in March 1894 informed the District Meeting that only three Trustees of the chapel were still living. ‘New trustees have been appointed. But we are waiting the completion of negotiations with the County Asylum authorities for the purchase of the Chapel and the gift of a new site before the Deed is made.’ (3)  The expansion of the hospital at Thorpe St Andrew meant that all the property surrounding the chapel had been acquired by the hospital and the lane in which the chapel stood was to be closed.  The hospital authorities agreed to pay £130 for the congregation to leave the chapel and also offered to provide a site for a new building.

Difficult negotiations ensued with the minister repeatedly protesting that the hospital officials failed to keep in touch and also failed to present proposals that could be placed before the Circuit Meeting, the body appointed to deal with the arrangements.  The Circuit then rejected the sites suggested by the hospital for the new chapel.  Although both the minister and the architect were in agreement in declining these pieces of land, there was also a general lack of amicable communication between the architect A.F. Scott and the superintendent, F.C. France. A letter France received from the previous minister at Scott Memorial, John Welford, respecting the possibility of employing a second minister perhaps explained the difficulty – ‘you may always look for the opposition of the Scotts.  They don’t believe in preachers at all and every penny you get is, in their estimation, money thrown away.’ (4)  This was an interesting observation when the Scotts’ father was an ordained Methodist minister.

Eventually the matter was resolved.  A site was agreed and a new chapel built.

It is preferable in every respect.  It stands on the brow of the hill just beyond the asylum cottages and commands an expansive view of the Yare valley….It is of red brick relieved with white Cossey ware.  A four-light tracery-headed window facing the road surmounts the main doorway, the side windows are pointed and the roof half-timbered.  Accommodation is being provided for a congregation of 160.  The architect is Mr A.F. Scott of Norwich and the builder Mr R.W. Riches of Postwick. (5)

At the stone-laying ceremony on the 28 March 1901, the Superintendent Minister, A.E. Calvert said that the enterprise had been considered for the last ten years and the total cost was £350.  R.J. Price, the local Member of Parliament, who was to have laid one of the stones, had to cancel his appearance at the last moment and his place was taken by J.W. Clabburn, the Deputy Mayor of Norwich.  He placed £5 on the stone from Mr Price and added a sovereign of his own.  Other stones were laid by Miss Clabburn who gave £1, Mrs James Stuart who gave £5 and by the Rev. Alfred Calvert on behalf of the trustees.  Members of the congregation then laid bricks and made their own donations.

Although at this time there were only 14 members at Postwick, there was a regular congregation of 140, a Band of Hope with 17 juvenile and four adult abstainers and a Sunday school of 50 scholars and four teachers.  Yet a pessimistic Sunday school report in 1909 explained  ‘here a small staff struggles amid the indifference of parents and active Anglican interference’ whilst the report of 1912 explained that ‘7 have joined the Church of England because only by doing so can they become Scouts.’ (6)  For a time there was a Christian Endeavour Society.

Congregational attendance fell considerably during the early years of the twentieth century and by 1920 there were 40 adherents, a number which remained constant up to Methodist Union in 1932.  In the reorganisation which followed, Postwick was incorporated into the Queen’s Road Circuit.

The building was gradually modernised.  A building fund was established at the chapel in order to build a hall for the Sunday school and by the mid century £200 had been collected.  However, the hall was never built.  Towards the end of the century, two rows of chapel seats were taken out in order to make more room and the wood was used by Wilfred Barber to make a communion table and tray.

As with many rural chapels, there was a gradual decline in membership during the twentieth century.  The chapel eventually closed in 1990.  It has now been demolished together with other nearby properties to make way for large industrial development.  However, the last steward, Mrs Irene Reynolds, still maintains a Christian fellowship group which takes part in circuit activities and contributes more than £200 each year to the Network organisation.