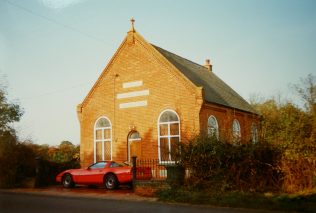 Scoulton Centenary Primitive Methodist chapel was first opened in 1909 and served until the 1970s. On the front it had the inscription PRIMITIVE METHODIST CHURCH CENTENARY 1909 and there are nine foundation stones dated 12 April 1909.

At the time of Keith Guyler’s picture it had been converted into a house.