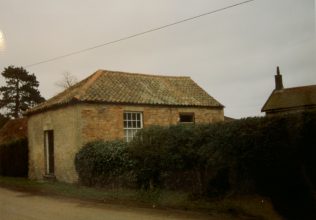 After the society had met for several years in a house and then a barn, Shouldham Thorpe Ebenezer Primitive Methodist chapel  was opened on October 7th 1849. It was in the Kings Lynn circuit. The land was purchased from Mr Violen. Preachers included  Revs W Ward and R hamilton (Independent) and Mrs Kelk, J Langham and H Bourne.

The chapel cost £107. A Sunday school was established by H Bourne and Mr Burrell and the early signs were promising.

The Shouldham Thorpe Conservation Area Report describes it as of particular note. It points out that many of the bricks along the eaves bear names, presumably inscribed before the bricks were fired, by members of the original congregation. The front is of gault bricks, but the side has a mixture of reds and gaults and the pantiles are of a similar attractive mix of clays.

The chapel was in use until the 1950s. At the time of Keith Guyler’s photograph it was in use as a house.