You are here: HomenextChapelsnextNorfolknextSnextSnettisham and Docking Primitive Methodist Chapels, Norfolk 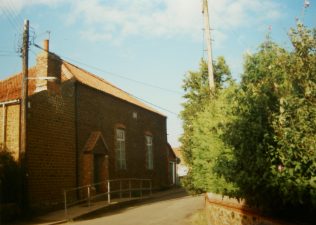 Reports of local chapel activities were often sent to the editor of the Primitive Methodist Magazine for the encouragement and edification of its readers.   In 1847 an account was published of special services which had been held at Snettisham.  It revealed some of the difficulties which were suffered by the poor in rural north Norfolk in the later 1840s, a period often described as ‘the hungry forties.’  It also showed the rigorous demands of the chapel.  The minister, John Bunn wrote:

During the past year we have suffered loss in several places through the removals of many of our useful and leading men and pious members to seek work on different railways; but the Lord is graciously filling up many of the vacancies.’

He then went on to describe a week of protracted meetings.

Meetings were held during the week at five o’clock in the mornings, three in the afternoons and seven in the evenings.  When I first announced the times for the meetings, five o’clock was objected to; but I urged that the morning meetings should be especially supported, that we might prove we could leave our beds for the sake of souls.  Fourteen persons were at the first meeting; and a glorious manifestation of the Divine presence we had; and our mornings’ attendants increased to twenty-two.

The evening meetings saw attendances of more than two hundred and a number of people were converted and a juvenile class of young people was formed.

John Bunn’s ministerial colleague, Richard Woods, then began another week of protracted meetings, this time at Docking.  Again three services a day were arranged.  He noted,

The Society was in a feeble state, some of its members having left, alleging their inability to afford any class-money and others having removed in search of employment.

Again, a number of people were converted during the services and lengthy prayer meetings, to the rejoicing of all present.  Yet after giving thanks for these conversions, Bunn concluded,

The high price of provisions, the severity of the weather, and the low rate of wages in this district, render the support of a large family extremely difficult.  A labourer’s wages do not exceed ten shillings a week; and these are soon expended on a small family.  However, in our poverty we trust in the Lord and are happy.