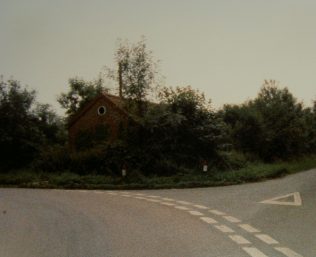 The chapel is dated late Nineteenth Century but the notes with Keith Guyler’s photograph of the Primitive Methodist chapel at Themelthorpe (which he calls Thelmerthorpe) tell us nothing apart from the Ordnance Survey grid reference and the fact that it accommodated 50 people.

The grid reference is a bit confusing in that it identifies a point which is on a straight bit of road. The 1946 one inch Ordnance Survey map confirms this location.  There is no chapel at this reference on Google Street View in 2008/2011.

The picture however is of a building at a junction.

One possibility is that the chapel was actually a little further north, at the junction of The Street and Reepham Road.  Hidden in the bushes on Google Street View in both 2008 and 2011 is a derelict building; it is aligned the same way as the photograph but appears smaller.

A thread on Rootsweb refers to a Christening in the chapel in 1950 so it was open then.