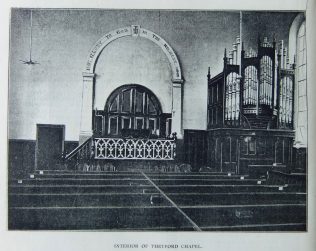 You can trace some of the history of this chapel through the Primitive Methodist magazine.

The Primitive Methodist magazine of 1830  contains an account by Robert Olby of the opening of Thetford Primitive Methodist chapel. Opening services took place on Sunday 8th November 1829. Preachers were G Tetley and R Steele.  The chapel was erected solely at the expense of Mr. George Wharton “for the benefit of the inhabitants of Thetford.” It measured 16′(w) x 28′(l) and seated 90 people.

In due course the chapel was enlarged by the addition of the two cottages that stood in front of it.

The major improvement was the addition of a gallery.  Opening sermons were preached by Revs Messrs Mathews, Baddeley, Tetley and Reed.

In the 1859 magazine Robert Nurse (senior) tells of the further enlargement and improvement. The society was carrying a debt of £180 by this time which was a major burden, but in 1858 Thomas Mackill helped them reduce it by £50, which encouraged them to consider expansion.

A survey of Sunday schools in the town revealed that the Prim Sunday school was the second largest in the town, and this prompted Cornell Fison, the Thetford mayor to acquire and donate land for  expansion. After expansion and improvement the chapel seated 450 and measured 46′ x 36’with a vestry 18′ x 11′. The cost was £193/17/9 of which they had raised £132/18/3.

But that was not enough. In 1863 they laid the foundation stone for a new chapel.

“Less than four years ago our old chapel was enlarged, but still, it is not sufficient now for accommodating the congregations and Sabbath-school. Hence, after deliberation and prayer, we sought and secured a most eligible site to build upon, a public meeting was called, and a number of ten shilling shares were at once taken up, and the way seemed sufficiently open to warrant us in commencing operations.

Accordingly, on Monday, May 4th, the ceremony of laying the foundation-stone took place in the presence of several hundreds of spectators. Mr. Joshua Finch laid the first stone—Miss Finch a second—and Mr. G. Doubleday (all of Hockham) a third — each of whom laid down £5—beside a number of other friends who laid on the stone sums varying from a sovereign to a sixpence. The Rev. W. Yeadon delivered a very appropriate address on the occasion ; after which a public tea was provided in the British School-room for about 200 persons.

This was followed by a public meeting held in the Wesleyan Chapel (kindly lent for the occasion) addressed by the Delegates who were assembled at the District Meeting. The amount realized on the occasion, including donations and collections, was about £45.

The building was contracted for by a practical gentleman in the town ; and is being built with red bricks mixed with white ashlars and Bath stone, which give it a beautiful appearance ; it will be the most conspicuous building in the town. And we hope, dear Editor, that many a happy spirit when safely inclosed within the jasper walls, will have to confess that within the walls of this building its heaven was on earth begun.—J. Allison”

Do these chapels still exist?  Where were they?

Primitive-Methodism-in-Thetford- (1 MB Adobe Acrobat document, opens in a new window)
A summary of Primitive Methodism in Thetford by Norma Virgo