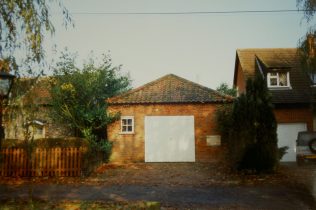 Thompson Jubilee Primitive Methodist chapel was opened in 1860 and served until the 1970s.

By the time of Keith Guyler’s photograph it was in use as a private garage.

Although its location is clearly marked on the one inch 1946 Ordnance Survey map, at first I couldn’t find it on Google Street View in 2011. Then I realised it had been replaced by a two storey extension to the adjoining house.  It does however retain an inscribed stone about its origins.

The opening of the chapel and the troubles endured by its founders are described in the Primitive Methodist magazine by WH Meadows. “Bigotry has put forth its wonted efforts, and manifested no small amount of ingenuity, in order to rid the place of the ” hated sect.” To accomplish this, some parties who are opulent and influential in the neighbourhood, have lent their aid, not deeming it beneath them to resort to open and violent means to gain their ends.”

Opening services took place on 18th November 1860; preachers included WH Matthews, R Church and O Jackson. The new chapel measured 28′ x 19′, and seated 130 – just the number who sat down to the celebration tea. It cost £140 of which £62 had been raised.