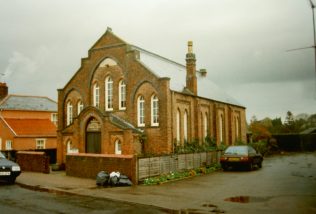 Tilney St Lawrence Primitive Methodist chapel was opened in 1897.  There is some contradiction in the notes which accompany Keith Guyler’s photograph about its closure. He gives the date as 1970s, but he also dates the undertakers that it became from 1960.

The Cambridgeshire Archives hold records until 1974.

Google Street View in 2009 shows it still used by RF Whitear, undertaker.  In 2013 you could have bought it for £120,000, complete with planning permission for conversion into a two storey dwelling house of approx 2150 square feet.