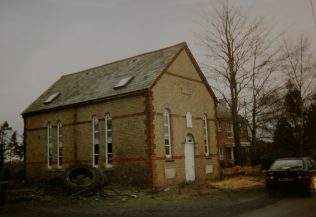 Tottenhill Primitive Methodist chapel dates from 1881 and served until the 1960s. It was erected at a cost of £350 on land given by Mr. W.G. Hoff. It seated 150 people

By the time of Keith Guyler’s photograph in 1996 it was unused. The Village War Memorial tablet was on the front wall above the door.  On Google Street View in 2009 it had been converted to a house, The Old Chapel.