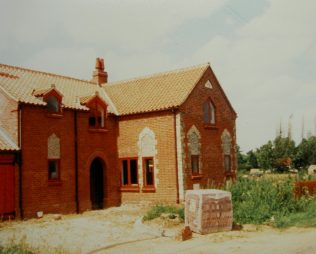 Westfield Primitive Methodist chapel was opened in 1876 and served until the 1970s.

It accommodated only 50 people.

By the time of Keith Guyler’s photograph in 1987 it was in the process of being converted into a house.  On Google Street View in 2011 it is partly hidden by a flourishing Virginia Creeper.