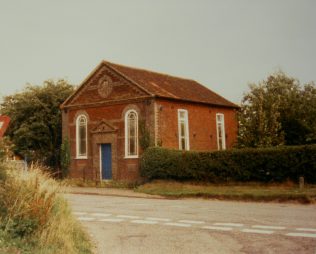 At the time of Keith Guyler’s photograph in 1987 it was an unused garage. It was subsequently converted into a house.

The Norfolk Heritage Explorer website reports that this is a small three-bay red brick chapel with pedimental gable. The date is shown on the defaced tablet and the foundation stone has been reported to have been obliterated.