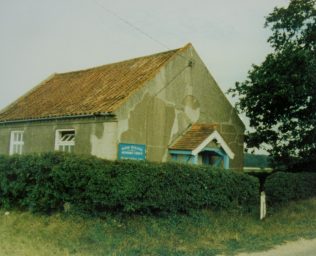 In the notes which accompany Keith Guyler’s photograph, the origins of Wood Dalling Primitive Methodist chapel are linked to 1836 and 1860 (with a question mark) as well as 1830.

At the time of Keith Guyler’s photograph it appears to be in use.  However, Norfolk Heritage Explorer reports a 2009 planning application to turn the former Methodist chapel in Heywood Road, Wood Dalling into a holiday let.  It is described as “a small wayside building of rendered brickwork.”