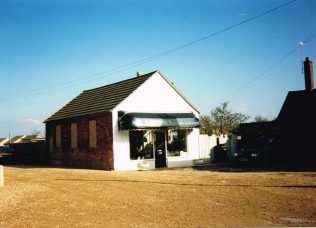 The notes with Keith Guyler’s picture say the chapel shown is Eye Primitive Methodist chapel.  He says that the chapel opened around 1870 and closed in 1934 and accommodated 200.   At the time of his photograph it was a hairdressers.

He also notes that the building shown might have been a United Methodist rather than Primitive Methodist chapel.

Investigation using Ordnance Survey maps identifies the United Methodist (then the Free Methodist) chapel as being a little further along the High Street, to the east of the Blue Boar pub. On the 1972 map it is labelled Eye Methodist church. On Google Street View in August 2016 that chapel has been converted to a house.

The 1887 1:2,500 Ordnance Survey map shows the Primitive Methodist chapel as not the small building shown on the photograph but a larger one, now demolished, in the car park behind. This is plausible; can you imagine 200 people seated in the hairdresser’s building?

The Primitive Methodist magazine for May 1853 provides further information in an account by J Seager. The Primitive Methodists had been meeting in a barn for 15 years previously, but the Wesleyan chapel in the village became disused (because some members had been expelled) and the Prims acquired it for £105. It is described as 35′ x 23′ and 17′ high with a gallery and a boarded floor – does that sound like the hairdressers? Mr Seager also gives the figure of 200 people as its capacity.

The chapel was re-opened on Sunday March 6th 1853 with sermons then and in the following weeks by Rev J Haigh (Horncastle), Rev T Andrews (Bibile Christian) and Rev T Barras (Baptist).

Primitive Methodist magazine for May 1853 p.309