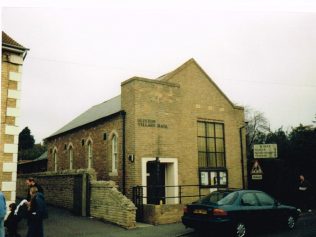 Glinton Primitive Methodist chapel, which accommodated 150 people, was opened in 1861 and closed in the 1970s.  The chapel became the village hall and is shown as such on Google Street View in 2012.

J Ashworth describes the opening of the chapel in 1861.

“Some of the pioneers of our Connexion proclaimed salvation in this village more than forty years ago. About twenty-seven years since our Brother Kirby was sent by the Lynn Circuit, as a missionary to this part of the country, and his labours were owned of the Lord. For years we had a promising society at Glinten, some of the most influential people of the place attended our ministry and assisted in our Sabbath school. Mr. Ogden allowed the use of a place of worship for a small rent, and he continued a warm friend and devoted member till his death ; but his death occasioned a painful reverse in our affairs at Glinten, we lost our rented chapel, our Sabbath school was scattered, our society diminished, and for years we had nowhere to meet’ but under the canopy of heaven.

For the last nine years we have been indebted to Mr. Pettafor, for the free use of his cottage, which has recently been too small to contain the numbers who attended to hear the Word of Life. Since then an eligible site of land was purchased, and a neat sanctuary was erected thereon. It is 38 feet by 21, and 14 feet from the floor to the ceiling. The opening services were commenced on Thursday, July 25th, and continued on the two following Sabbaths,when the ltevs. R. Eaglin, T. Wilkinson, J. Ashworth, Messrs. W. Pentney, and J. Edis, took part in the services, which were well attended, and crowned with the divine blessing. The whole cost of this sanctuary will be about £240, towards which we have already realized £60, and hope shortly to obtain the remaining balance to make up onethird at  least of the entire cost. …”

In the Primitive Methodist Leader of April 20th 1911, this account was found:

At Glinton on Good Friday we were visited by the New Road P.M. C.E; Choral Society from Peterborough. After a public tea in the afternoon, the Choral Society, consisting of about thirty voices, rendered the cantata eel-titled ” The Land Beyond,” in tfie evening, under the conductorship of Mr. W. H. Clarke, with Mr. G. W. Stimpson as-organist. The chair was-occupied , by Mr. C. Green, of Peterborough. The chapel was full, numbers having to stand. Proceeds, which were for Trust Funds, were in advance of last year.

A notice in the London Gazette for the 8th September 1922 declared that:

A Separate Building, duly certified for religious worship, named PRIMITIVE METHODIST CHAPEL, situated at Glinton, in the civil parish of Glinton, in the county of Soke of Peterborough, in Peterborough registration district, was on the thirty-first August, 1922, registered for solemnizing marriages therein, pursuant to 6th and 7th Wm. IV, c. 85.—Dated the 4th September, 1922.