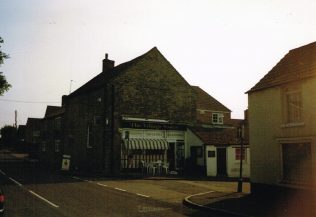 The Primitive Methodist chapel was erected in 1863, with accommodation for 150 people.

The chapel was closed before 1940 and at the time of the photograph in 1996 was in use as the village shop.  It remained as the shop on Google Street View in 2009.

The Primitive Methodist magazine for 1863 contains an account by P Coates of the opening of a new chapel in what it names as Great Duddington.  Although there is a village in Northampton called Duddington (rather than Great Duddington) near the Rutland border, I believe that the account relates to this chapel in Great Doddington as the opening date is the same and the building is of the same size.

“Northampton Station.—Great Duddington has had the labours of Primitive Methodist ministers for many years, but for want of a suitable place in which to worship the cause has had many reverses ; but on July 12th and 13th, we opened for divine worship a neat substantial chapel, capable of seating about 150 persons. The entire cost, including land, &c, will be about £122, towards which we have already raised by collections and donations upwards of £44.

The opening sermons were preached by the Rev. W. Durance and Mr. C. Cooke (Wesleyan). We take this opportunity of tendering our thanks to Mr. S. Chapman for land, and for paying for its conveyance to the Connexion, for liberty to dig the stone needed, and for a donation of £1 towards getting out the stone ; to Messrs. J. Moore, T. Arch, and S. Hawkins, for their kindness ; and to all who have contributed to this much needed and praiseworthy undertaking.

The chapel is an ornament to the village, and has already been the birth-place of precious souls. To God be all the glory. P. Coates.”