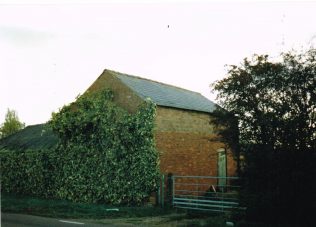 Newborough Primitive Methodist chapel opened on November 11th 1858, eleven weeks after the laying of the foundation stone by W Vergette on August 26th 1858. There’s an account by J Ashworth in the Primitive Methodist magazine. Rev J Brownson of Leicester preached and there was tea  for 250 in Mr Aitkin’s marquee.

There had been a Prim society in the village for around 20 years previously although sometimes having only one or two members, with W Key the main force in keeping it going. In 1855/6 Mr Uper for the society rented an old thatched cottage that they fitted up as a chapel. Mr W Freear arranged its purchase for £50. A Sunday school of over 100 children quickly developed.

The new chapel butted up to the old one which could thus be used as a vestry. It had a Gothic design; measured 35′ x 24′; was built of brick with stone cills and window heads and a slate roof. It cost around £220.

Peterborough City Council identifies a record of the register of christenings/births for 1872-1952.   The chapel which held 160 did close in the 1950s.

At the time of Keith Guyler’s photograph in 1995, it was a farm store.